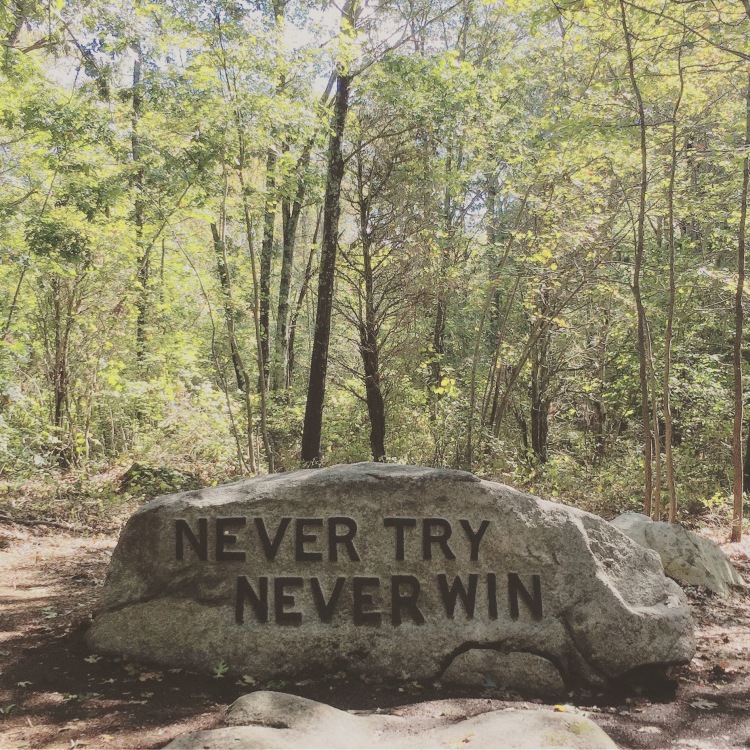 As a native Midwesterner, New England has always seemed full of secrets to me. But none as surreal as the Babson Boulders, a seemingly random collection of massive boulders with inspirational all-caps etchings scattered around the forest of an abandoned inland settlement in Gloucester, Massachusetts.

I first learned about the boulders six or seven years ago, when someone recommended the site to me after hearing about it from someone else who heard about it from someone else. That’s my kind of provenance.
My wife is a native Massachusettsian, so I asked her if we could take an afternoon to check out the boulders on one of our visits to her family, who live around 90 minutes west of Gloucester (pronounced GLOSSTA, by the way). And last weekend, after six or seven years of trying, we finally made it happen.

On one hand, you can walk ten feet in any direction in Massachusetts and find rocks in the woods. There’s no sense in driving 90 minutes for something you can do in your backyard, unless you know the story behind the boulders. And that’s precisely what compelled me all these years (plus the promise of fresh seafood served waterside at Cape Ann Brewing Company afterwards).

Named for entrepreneur and landowner Roger Babson (1875 – 1967), the Babson Boulders reside on the land of a settlement once known as Dogtown Commons, home to a few shepherds, farmers and other tradespeople since the late 1600s (aka ancient American history). As the Gloucester area and economy evolved through various wars and industrial developments, Dogtown was eventually “overrun by dogs, vagabonds and witches” in the 1800s. The land passed to a trust currently co-owned by the cities of Gloucester and Rockport and has become a de facto nature preserve mostly frequented by locals.

Meanwhile, Babson was a successful and apparently “unorthodox” investor with money to burn (see his Ten Commandments of Investing). His relatives were native to the Dogtown area and in 1927 he purchased nearly 1,200 acres of it, claiming a boyhood fascination. When the Great Depression hit a few years later, he decided to start writing his “Life’s Book” on the boulders scattered around, hiring 35 unemployed Finnish stonecutters to etch his inspirational sayings into stone. His family thought he was crazy, though according to his autobiography, Actions and Reactions, he disagreed:

“Another thing I have been doing, which I hope will be carried on after my death, is the carving of mottoes on the boulders at Dogtown, Gloucester, Massachusetts. My family says that I am defacing the boulders and disgracing the family with these inscriptions, but the work gives me a lot of satisfaction, fresh air, exercise and sunshine. I am really trying to write a simple book with words carved in stone instead of printed paper. Besides, when on Dogtown Common, I revert to a boyhood which I once enjoyed when driving cows there many years ago.

The boulders are now peppered throughout an overgrown forest crisscrossed with a maze of trails. If you don’t know what you’re looking for, most are easy to miss. Here are a few favorites:
To find the Babson Boulders, ignore all of the directions you see online. Instead, download this map and plug in 86 Cherry St, Gloucester, MA into Google Maps. That brings you to the entrance of Dogtown Road. Drive down that until you can’t anymore, and then keep walking down the road, which eventually turns into a narrow trail. Eventually you’ll find the boulders.