After spending two weeks in Truth or Consequences, New Mexico, for the first half of July, I’m officially back in Chicago. At least, my body is. My psyche is still in the desert somewhere. On one hand, it feels like I was gone for a long time. On the other, it feels like I never left Chicago; this small Edgewater apartment, this noisy block where the cars bottom out on the speed bumps, this stupid cat who recently started snoring for some stupid reason. 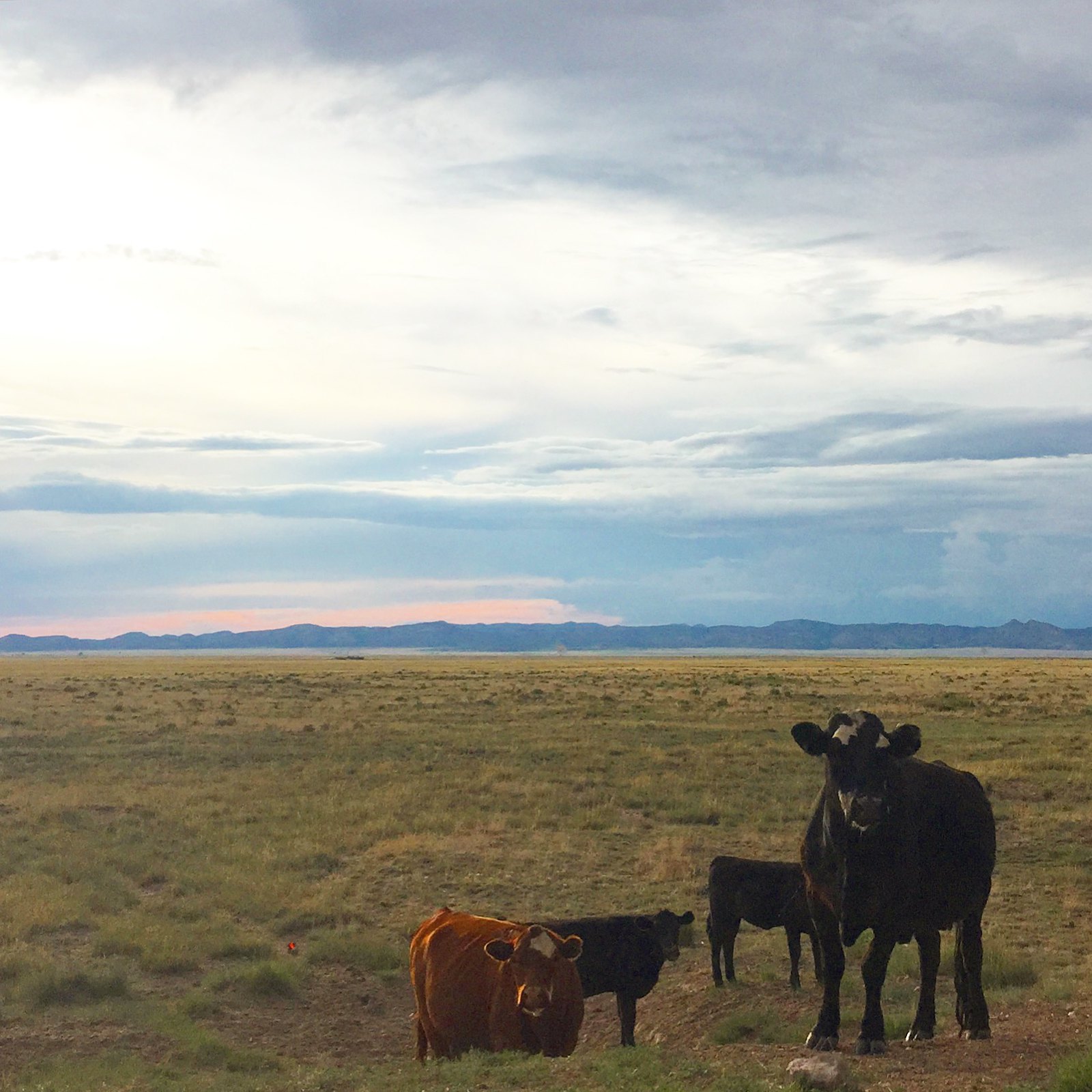 – From my lifetime of road trips crossing the Midwest, I’ve come to see billboards as a part of the native landscape. They signify civilization. Once you’ve grown used to having them around, you can’t imagine the modern world without billboards. In New Mexico, outside of the major metro areas, there are few billboards—if any. Just road signs, bushes, and mountains. No civilization to signify.

– The line between inside and outside spaces in New Mexico is far more blurred than in four-season climates, like the central Midwest. I think this cultivates a greater appreciation for nature. Or greater tolerance, anyway.

– The coolest thing I saw in New Mexico was a tarantula. Until this point in my life, I’d only seen tarantulas in videos, at zoos, or encaged in the basement terrariums of childhood friends who would grow up to commit grand theft auto. Tarantulas have a lot of predators in the desert, so they’re pretty cautious and timid. Because they live in burrows, they occasionally emerge when they smell a storm, looking for high ground. 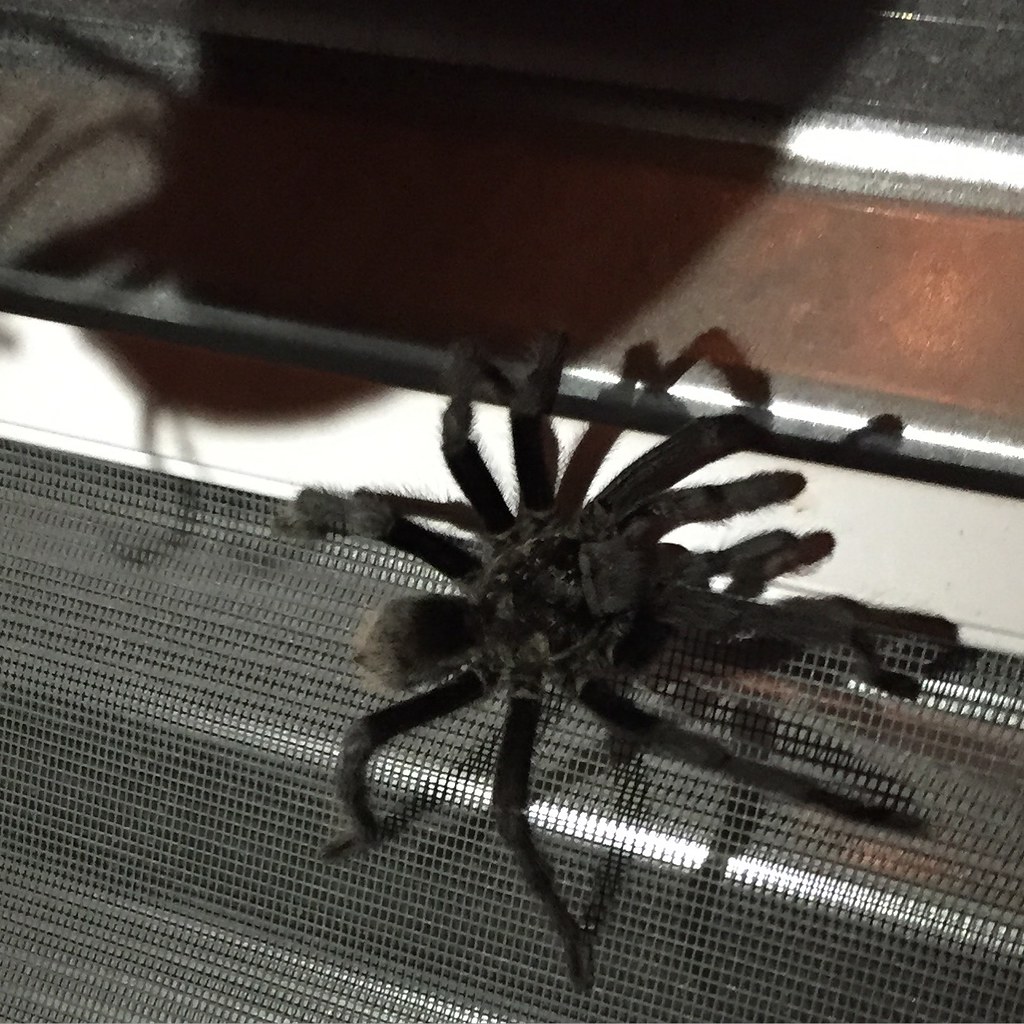 – Out of desperation I ate at a Carl’s Jr. And then I drafted a will.

– On my way back from a drive through Gila National Forest, I stopped at a rock and fossil shop near Hillsboro, New Mexico. A middle-aged couple, skin leathery and burnt and teeth stained with years of tobacco tar, greeted us inside. Once they learned I was from Chicago, one asked what I thought about Obama (because this is how you’re supposed to make conversation with your paying customers). Sensing her urge to confront, my answer was noncommittal: “Well, he’s almost done.” Because it’s true. He is almost done. (I later realized that through my years working in offices, surrounded daily by idiots making stupid conversation, I’ve been able to perfect the art of the ambiguous, non-confrontational comment. Ask me anything. I’ll kill the conversation right in front of you, while you watch. You won’t even know it happened until you’re yawning.)

– I asked a New Mexican if the people of New Mexico are generally for or against Breaking Bad. You know, maybe a good-for-the-economy-but-bad-for-the-reputation thing. She said, “I don’t think people here like that show much, because it makes New Mexico look like New Mexico.”

– Albuquerque is probably the shittiest city I have ever stayed at a Motel 6 in. Or enjoyed a $2.15 movie in. Or eaten at a Fuddruckers in. 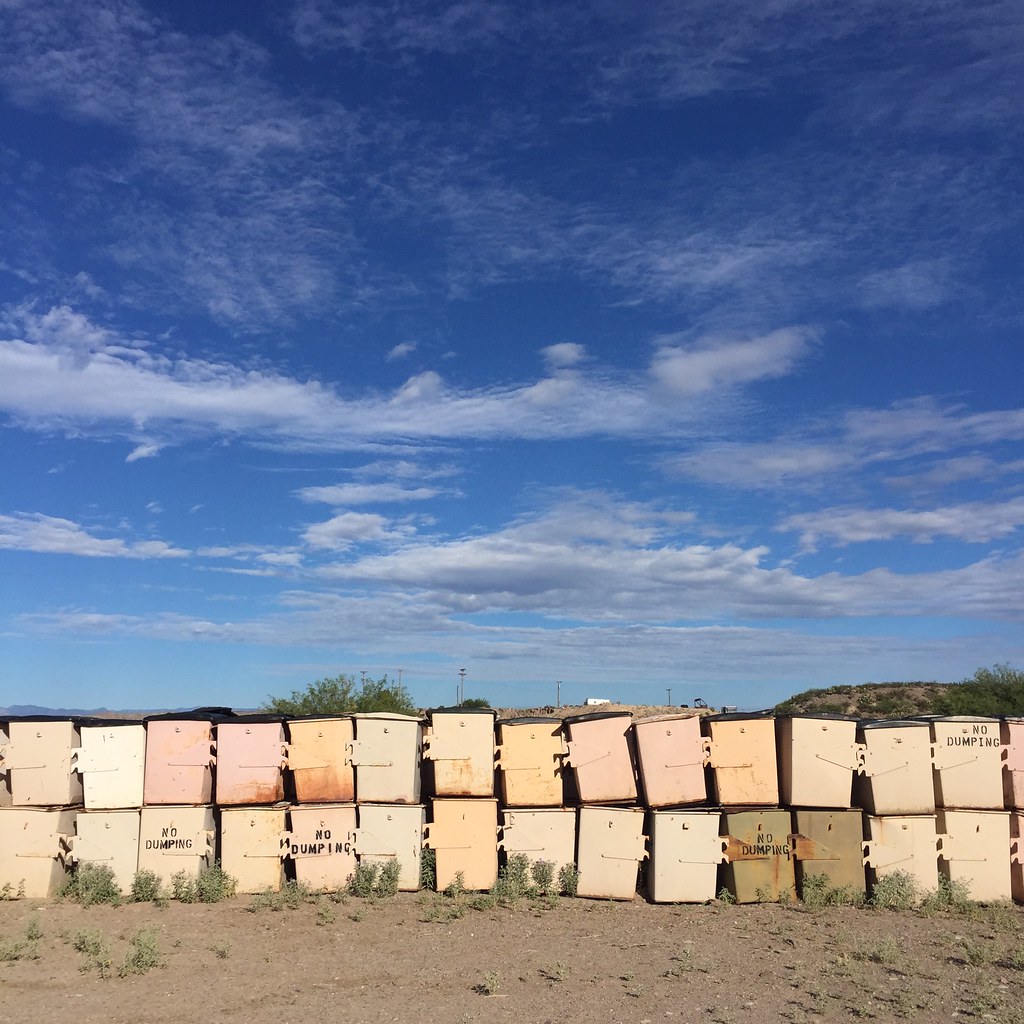 – My most exhausting day was when I decided to drive to Roswell—roughly four hours northeast of Truth or Consequences. The drive was nice enough. It even took me through Lincoln National Forest, and the home town of Smokey the Bear (originally “Hotfoot Teddy”).

– Roswell was bleak. It had a main street, with most of the businesses boarded up. A few alien-themed gift shops, a Subway, and signs for the UFO museum. Blocks over were trailer homes with barbed wire fences, abandoned warehouses, and rusting cars. I walked into one gift shop where the man behind the counter said: “Greetings, Earthling!” He was middle-aged, portly, bad combover, wore pants that were too short and a t-shirt that was too tight, and had glasses thick and foggy as Lake Michigan ice. And he was non-stop with the alien jokes and was the coolest guy I’ve ever bought an alien souvenir from.

– The other coolest guy I met in New Mexico is probably one of the coolest guys I’ve ever met, period. Our first conversation was about New Mexico’s history with extra-terrestrials (and how these beliefs are indigenous and even pre-date colonial influence), and then his own history with transcendental meditation, astral projection, psychedelic visions of ‘The Tibetan,’ and other ephemera. He lived under a tree in the desert for over twenty years. One night we were hanging out and in he got up from his chair and walked into the dark. He returned after a few moments with a small gecko, and passed it around the group, telling all of us to show it love. I have no idea how he saw that gecko, or why it warranted our love. But that’s just how this guy did things, is all.

– The other other coolest guy I met was in Truth or Consequences, on the dirt roads near the banks of the Rio Grande. Another middle-aged dude, sleeveless shirt, weathered hat, sunglasses, overweight. I was walking, and he passed me driving a four-wheeler with a cooler strapped to the back. I figured, just another Wednesday morning. A few minutes later, he came back my direction and then stopped. “Y’all know where I can cross the river over here? I’m tryin’ to backroads it to Walmart so I can return this cooler!” 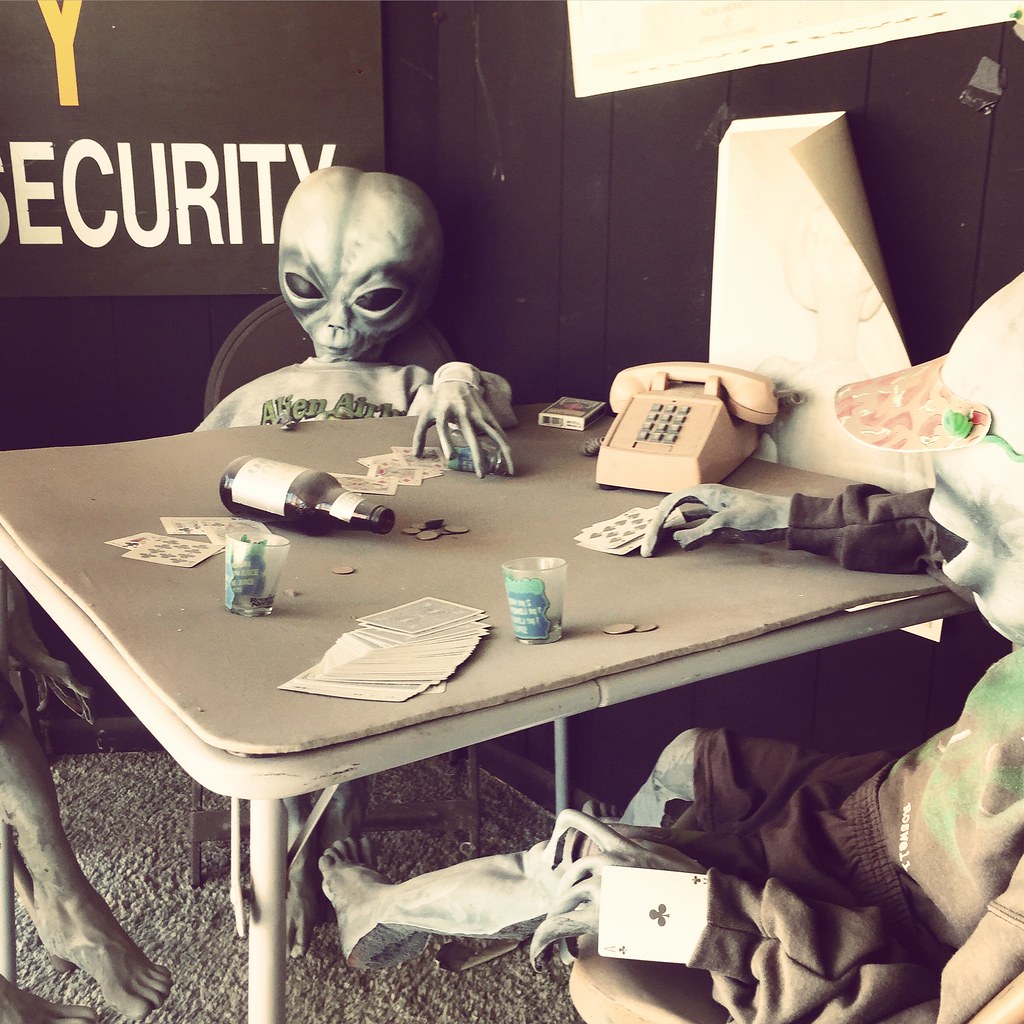 – New Mexico is the second-poorest state in the US, and the general understanding is that a lot of people—especially in rural areas—receive most or at least part of their income from the government (as social security, as military pay, as disability, etc.). Which makes the generally conservative, right-winged political atmosphere of the region super hilarious. Even though I’m a political nihilist, I can appreciate a good joke.

– Whatever resident was in my unit before me left behind a giant bag of Swedish Fish. These, in addition to some trail mix, protein bars, and bananas, constituted 40% of my diet.

– The original name for the town of Truth or Consequences was Hot Springs, because the town sits on top of a massive hot springs aquifer that produces 2.5 million gallons of water per day. And this water is hot and loaded with minerals, which makes for funky drinking water (with trace amounts of uranium, because this is New Mexico, after all), but great for soaking. My favorite place to soak was La Paloma, which was bona fide. Old wooden doors, St. Francis and Buddha statues, burning incense, New Agey background music, private tubs lined with stones over the actual hot spring water, crystal clear and up to 115 degrees. It’s the kind of thing other ‘spas’ aspire to (while charging four times as much), especially in the Midwest, but this was the real deal. I always felt a little woozy after emerging from the tubs, but the water worked wonders on bug bites. 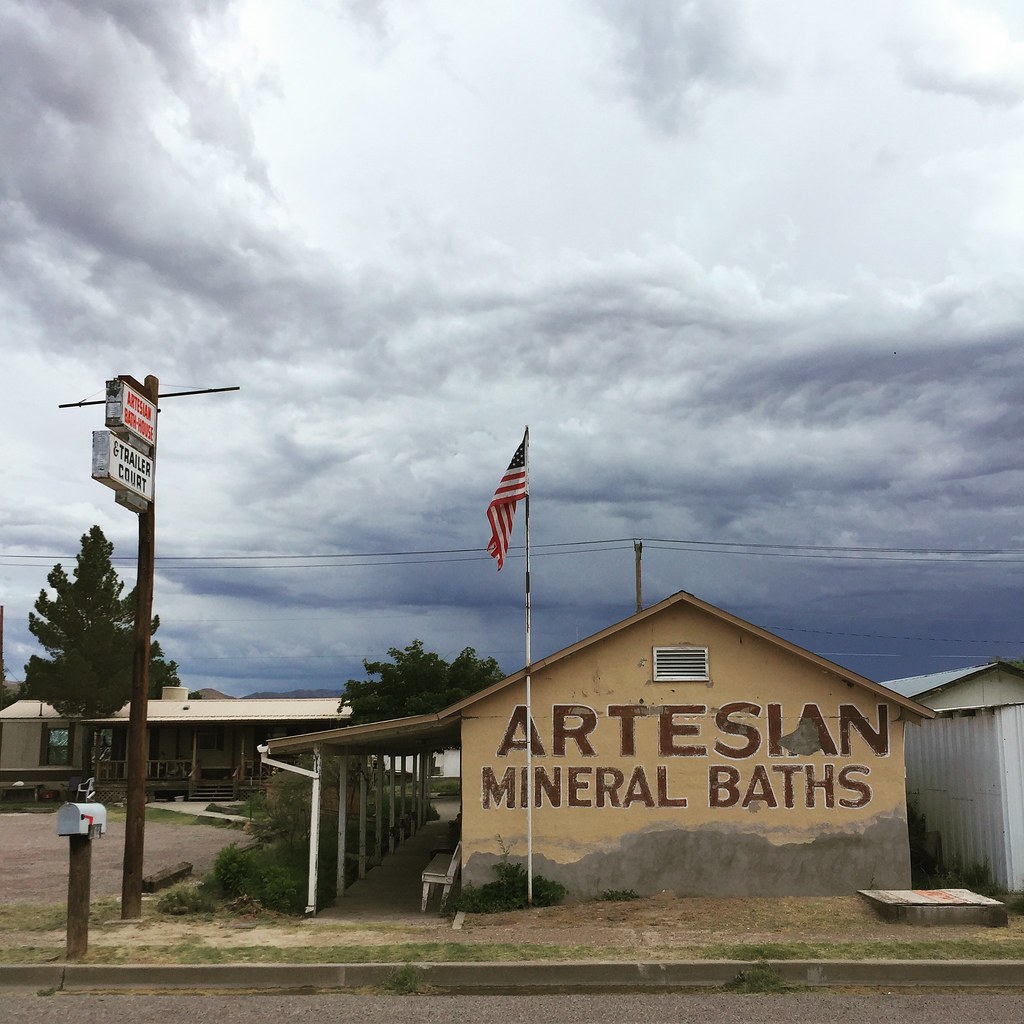 – Truth or Consequences is home to the El Cortez movie theater; probably the only movie theater in hours any direction. One guy sells the tickets, runs the concessions, and operates the projector. Terminator: Genisys was playing while I was in town. Before the movie started, the guy went down in front of the screen, announced the movies that would be playing soon, and then ran to both walls to turn off the lights. Then he ran upstairs and started the projector. No trailers—just straight into the movie. Seriously one of the best movie theater experiences in my life.

– My wife, Sarah, joined me for the second week of my residency. She flew into El Paso. I don’t expect that I’ll ever have another reason to go to El Paso.

– Got to check out White Sands National Monument, which was pretty awesome. But when you’re there, you’re constantly reminded that THIS IS ALSO AN ACTIVE MISSILE RANGE. And then you look a Google Map of White Sands and notice how fucking massive the missile range is, and how it’s all grayed out because it’s so top secret. And then the monument becomes less magical and more…unsettling.

– Also unsettling was my WebMD-fueled paranoia about sucking up a brain-eating amoeba in New Mexico. I was wary about the hot springs and the occasional swim in nearby Elephant Butte Lake. But I haven’t started seizing or feeling sore in my brainstem yet, so I’m probably okay. Probably. (But also, the fact that it’s called a brain-eating amoeba doesn’t really soothe the nerves.)

– The Gila Cliff Dwellings National Monument was pretty awesome, too. It was a long, steep, and occasionally nerve-wracking drive, but for such pristine remnants of an ancient civilization, it was worth it. We ate a lunch of peanut butter and jelly and some vultures yelled at us from a nearby tree because I think we interrupted their secret meeting.

– Also got to check out Petroglyph National Monument. Someone asked me what petroglyphs are. I said, “Ancient graffiti,” and I became excited about the day that public bathrooms full of SLAYER RULES will also be marked as national monuments. 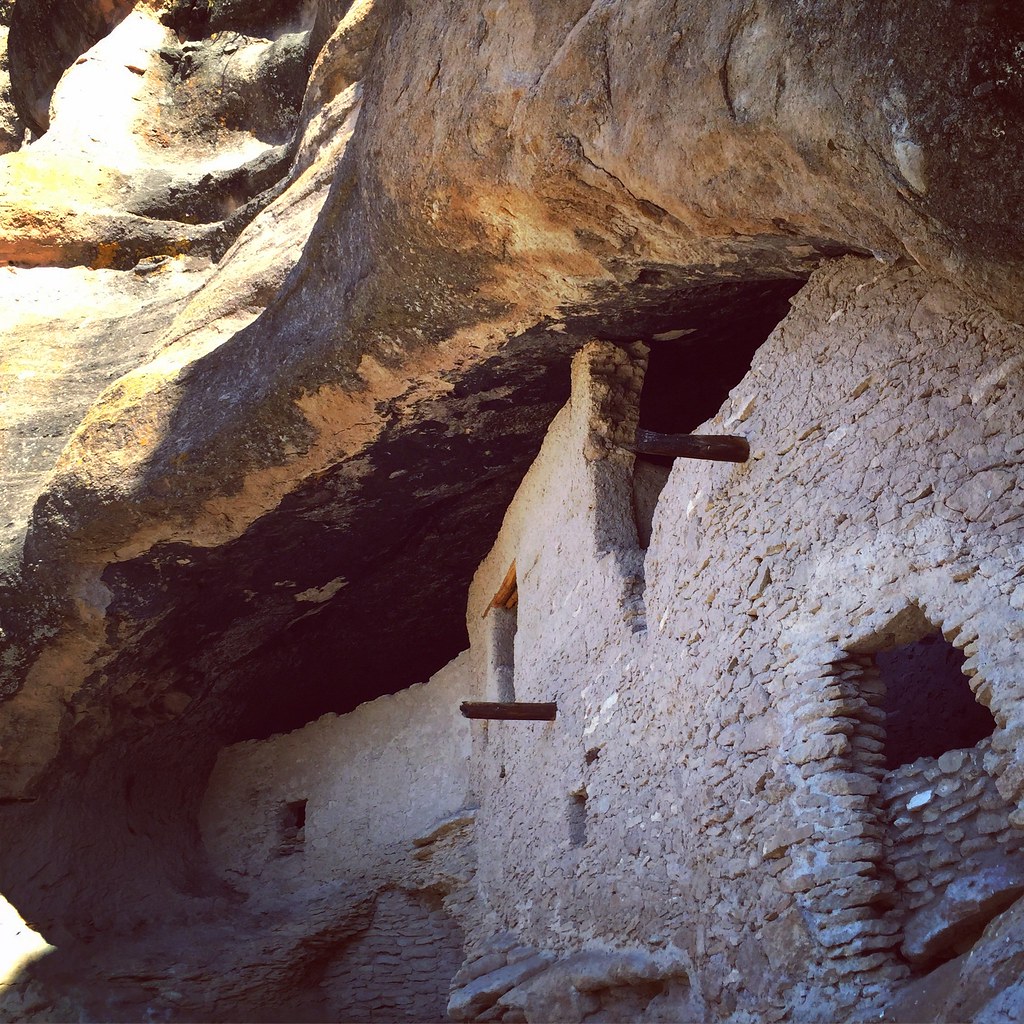 – Truth or Consequences neighbors the town of Elephant Butte, which was home to David Parker Ray, the Toy-Box Killer. Now that I’ve seen the area firsthand, it all sort of makes sense. But still, the southwest doesn’t have anything on the Midwest’s greatest claim to fame: our sheer number of serial killers.

– On the last afternoon of the trip, I drove up to Santa Fe to see what all the fuss was about. After spending the previous two weeks in the seat of rural poverty in the middle of nowhere, Santa Fe looked like the southwest’s version of Naperville, Illinois. Except with way more moneyed retired folks. I bought Henry Miller’s Tropic of Cancer at a bookstore there (needed some airplane reading, plus I’ve never read Miller, so yeah), but had to wait in line for ten minutes as the cashier gift wrapped someone else’s book, and then spent just as much time Googling a book for someone else, who bought nothing. Meanwhile a cowboy (Wrangler jeans, rancher belt, ten-gallon hat) talked to me about how much he loved Henry Miller. 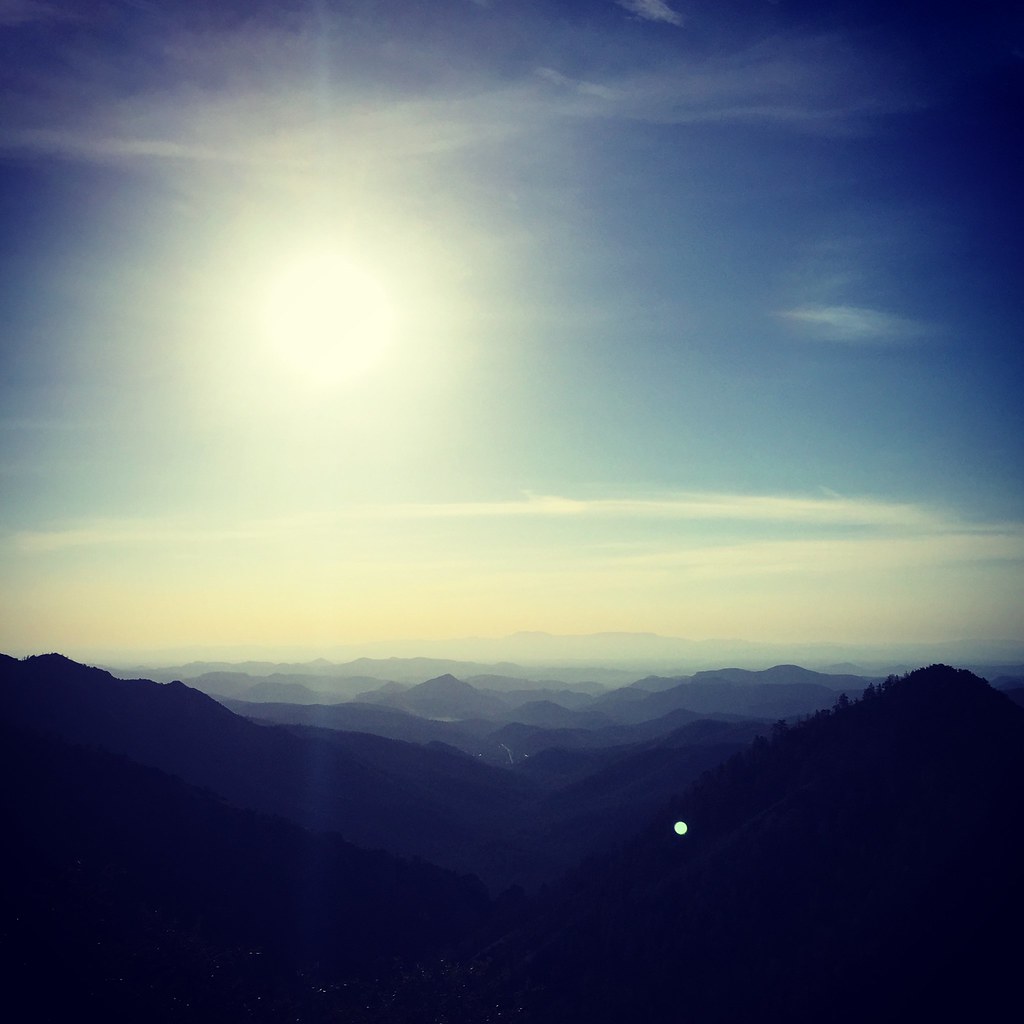 – And that’s it. A huge thanks to Starry Night Retreat for existing, and providing such an excellent residency experience. And another huge thanks to the City of Chicago’s Department of Cultural Affairs and Special Events (DCASE) Individual Artist Program for providing me with the funds to make this experience possible. It was an incredibly rich, productive, and creatively invigorating experience. I’d go back in a heartbeat.

(But two weeks seemed to be the right amount of time. I was starting to miss Patio Beef and J.B. Alberto’s and public transportation and even my stupid snoring cat.)

(Oh and here’s a link to the full photo album.)